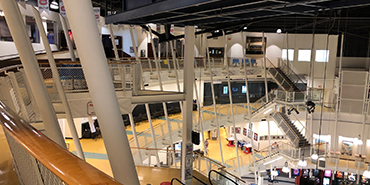 Our biggest accomplishment of all times!

This ambitious project changed this building in which our prestigious Canadian hockey players won so many games and Stanley Cups.

By keeping several images and symbols of this historical ghostly building, the new 2500-ton structure with its interior ovoid curves and exterior decorative trusses, accommodated many new stores, movie theaters, restaurants, and game rooms for families.

To address this challenge, Sofab had to intervein daily and methodically, in partnership with the professionals and contractor on the project.

Here is a short description of the project:

Let’s hope the ghosts moved into the new Bell Center to welcome their next Stanley Cup.